Want a high-level yet nuts-and-bolts glimpse into what’s been happening over the last year in the transportation industry from the perspective of a 25-year industry expert?

Matt Manero, president of Commercial Fleet Financing, takes you behind all the economic turmoil happening in the world of transportation to give you a clear snapshot of what’s going on based on 2 key economic charts.

This is adapted from a presentation Matt made to the CFF staff in the company’s third quarter meeting.

From the desk of Matt Manero…

*Credit to FREIGHTWAVES for 2019 analytic charts/graphs.

That means there is more freight available in the marketplace. There is lots of freight to be hauled. In an economic shrinking time, freight goes away. Why does freight go away in an economically shrinking moment or time? 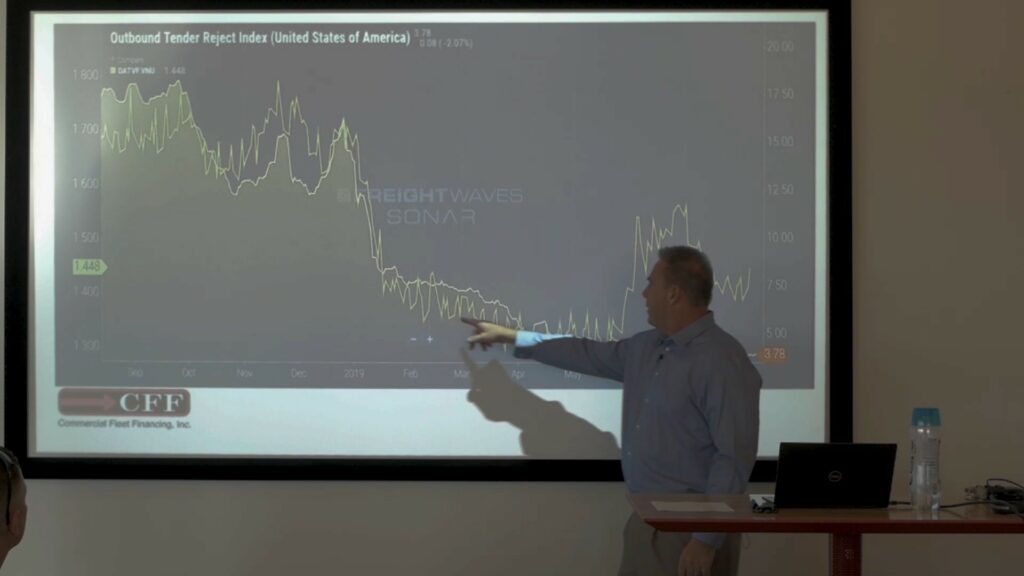 *Credit to FREIGHTWAVES for 2019 analytic charts/graphs.

This is a report that almost nobody spends any time on. This data tells the story. This is the Tinder rejection rate. This means that the shipper puts the freight out into the marketplace, and the trucker says, “I ain’t hauling it for those rates”.

Tinder is product. It goes into the marketplace. Rejection is the market says, “We won’t haul it for that.”

Nobody looks at this report. This report tells the story.

You follow me on that? Is that a good or a bad economy?

It’s a good economy for the trucker and bad for the shipper.

Because what happened is after the rejection, on average last year the price to get that freight hauled went up 14% before they were able to get somebody to take it. So if your freight got rejected, you had to pay 14% more to get it picked up.

If the Tinder rate is up because the market has strength to reject it, where does the trucker win? Such a bad question. I suck at asking these questions. The trucker wins in the spot market and unload boards.

That trucker could just wake up today in Nashville. Find a load that pays really good, haul it to Chicago. Wake up in Chicago. Go to DAT load board and find a great load, right?

By the way, it doesn’t just apply to trucking guys. It’s the same thing in every industry, right?

“No, I’m not going to build your home, sir, for the price that you want to pay.”

“No, sir, I’m not going to tow your car for the price you want it to be towed for.” 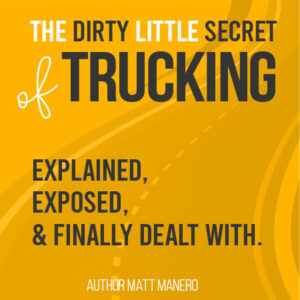 And then what do the truckers complain about? “I can’t get rates.” Well, it’s because the Tinder rate has gone, the rejection rate has gone down so low. The trucker is like, “I need that load. I just got to pay fuel. I know I can’t haul the dry van for a buck-40, but I gotta have it.”

Okay? This is the tide turning very fast in whose favor?

The shipper’s favor. Okay? Who else’s favor does this play? This is a more complicated question.

Who else wins in trucking? The freight broker wins here. The control over the freight becomes greater because now the supply and demand becomes much more to the broker in the shipper’s side.

This is absolute economics 101 happening in a very short period of time. So let’s take a look at what’s going on with the spot rates market. Okay?

Spot rates have basically cratered in trucking. So the rates are under performing 2017 but still a little bit ahead of 2016. That means that if you don’t have a contract, and you have to go to a load board to find freight, the freight that’s available is real sketchy. And as we know, think of sketchy freight as sketchy credit.

What happens with sketchy credit?

The chances of default, right?

The difficulty, the problems that’s beginning to happen. So volume is up, but capacity is so high to the amount of trucks able that the Tinder rate is going down, and the shippers are saying, “I don’t have to pay a premium for you to haul my freight.”

And so the rates are cratering too. That becomes the big challenge. It’s not that there isn’t freight, and that there aren’t trucks.

It’s that there are so many trucks above the freight that the shippers are now in control. And that’s why the rates are where they are, super, super low.

At Commercial Fleet Financing (CFF), our pros have given smart advice to fleet owners and owner-operators in the transportation, moving, towing or construction industries for more than two decades. With CFF, finding the right financing solutions is a phone call away and most borrowers secure commercial vehicle financing with ease. To talk directly with one of our finance pros and get started with a credit approval in as little as two hours, CFF’s phone number is (469) 281-2962.