The Saga Continues: California’s AB5 Ruling Could Be Blocked by Injunction

The Saga Continues: California’s AB5 Ruling Could Be Blocked by Injunction

Today, January 13, 2020, is a big day in the trucking industry and you’ll find out why in this article. 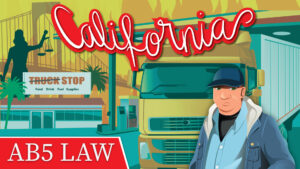 To recap, 2019 saw quite a few events that rattled the trucking industry’s cage, and the last quarter of the year was welcomed with yet another agitator.

This court ruling that was meant to protect independent contractor drivers, such as Lyft and Uber drivers in California, has stepped on more toes than the Senate planned.

A FreightWaves article reports, “An entire swath of employees are protesting that their livelihoods have been upended, from freelance writers to Uber and Lyft drivers.”

In fact, there are reports that a lot of companies have been spending tons of money to reconfigure their business operations in light of this controversial ruling.

One loophole companies have been exploiting is advising that their owner-operators change from being sole proprietors to becoming S corporations.

According to the IRS description, an S corporation is one with less than 100 shareholders “that elects to pass corporate income, losses, deductions and credits through to their shareholders for federal tax purposes.”

This new law exploded Twitter under the hashtag #AB5. Long story short, it’s been a blazing hot topic and has been more than a rock-in-the-shoe of tens of thousands of truckers and freelancers in multiple industries.

All that to say, it was more than refreshing news to hear that today, Jan 13, Federal District Court Judge Roger Benitez will hear arguments and decide whether to turn his temporary injunction blocking trucking industry enforcement of California’s AB5 independent contractor legislation into a preliminary injunction.

The California Trucking Association (CTA), brought a temporary injunction on New Year’s Eve, but plenty of other parties are rallied around the group in the fight to block AB5.

And the CTA makes a strong point.

In the FreightWaves article we learn “CTA is not litigating the specifics of AB5. It is focused solely on what the plaintiffs see as a conflict with the Federal Aviation Administration Authorization Act (FAAAA) of 1994. The wording in the FAAAA is fairly clear: “A state, political subdivision of a state or political authority of two or more states may not enact or enforce a law, regulation or other provision having the force and effect of law related to a price, route or service of any motor carrier.” It is that provision that the CTA says makes AB5 an illegal reach by the California government.”

Seriously, that sounds pretty clear to me that the state is making an attempt to overreach. Which may be why the state has granted the temporary injunction.