There are riches in niches, even in the transportation industry. So, let’s talk about the five richest niches that you could get into.

Welcome to Monday transportation in minutes. We’re talking about the importance of being a niche player. Now the reason companies don’t like to be niche is because they want to be a Jack of all trades. They want to be a generalist, they want to chase revenue in all kinds of different areas, and we disagree with that strategy. We actually think that if you can be the leader, the 800 pound gorilla in your niche, you can make the most money. So, let’s talk about the five most profitable niches in transportation.

The number one niche is ice road trucking. Those guys make bank. Now, it’s probably the most dangerous job out there. It doesn’t last all year long, but for that specific period of time, they can make some bank.

The number two richest niche and transportation is luxury car hauling. You can charge a lot of money to haul a guy’s Lambo from point a to point B. Heck, I know guys that have a home in Los Angeles and a home in Miami and they like to have their Lambo in both spots. So somebody is transporting that Lambo from LA to Miami. When this guy’s traveling to Miami to vacation, he wants his Lambo. You make a lot of money doing that transport.

The next is important and it’s dangerous as well. It’s called hazmat hauling. You haul difficult, dangerous stuff you get paid. The next is tanker hauling, all kinds of different opportunities to haul tankers. The next is over-sized load hauling. We’re talking about maybe even government contracts where you’re moving missiles from one place to another, or tanks from one place to another, or wind turbine pieces of equipment on those specialized pieces of equipment, those heavy hauls.

And the last one is mining, like working in coal mining facilities or gold or silver or platinum mining facilities. So you see where we’re going with this. It’s all niche based. It means you are the best provider in this niche and therefore you get to haul for the most money. Just hear me on this for a second. This concept of riches in niches is a big deal and I’ll leave you with one of my favorite quotes. I did happen to come up with it., it’s called “amateurs get crushed and experts get paid.”

Stick around for our bonus tip.

Thanks for continuing to watch. Here’s your bonus tip: 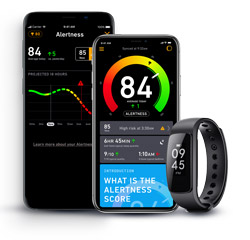 The company is called Fatigue Science and they have worked with the military and they worked with department of transportation. They’ve been around for a long time and they’ve developed what they call the safety SAFTE fatigue model and it tracks your fatigue throughout the day. They also have a wearable device called the ReadiBand. We encourage you to look into both of these. You can go to fatigue science dot com and learn more about this, but the graphing that they offer on their website is amazing. When you can see how energized we feel in the beginning of the day and how it tapers at the end of the day, to the point where it actually tapers at the bottom for a lot of people to the point like you’re drunk. Like you’re so tired, it’s as if you were intoxicated. Huge impact for the trucking industry.

And I just wonder for some of our larger trucking clients, what would it look like if you actually incorporated that in and began to track that? Because if you culturally can help your drivers improve their fatigue, and percentage or their fatigue model, you may actually have a better job of recruiting and retaining drivers. You make a driver’s life better by working for you,  you become a better company. So that’s the tip. That’s the bonus tip. It’s fatigue science, learn about SAFETY fatigue model and their wearable device called Ready Band wearable devices. We’ll see you down the road.

How Will AB5 Impact Independent Truckers and Fleet Owners?

There’s An Uptick In The Market Demand For [...]

The Demand for Light-Duty Is Growing! Since the modernization [...]